I want you to take a minute and try to read out the numbers in the picture above. Then, call out the clothing items that you see below these numbers. Easy, right? Well, what if I told you this was a challenging task for some people, and by some people I mean...my computer.

Wait, what…a computer? Yes! Just recently, when diving into what is now my deepest passion, Artificial Intelligence, I realized that machines, like computers, could classify all sorts of images. Due to my curiosity, I wanted to make two feedforward neural network models: one that could classify numbers and another that could classify clothing items!

In this article, you'll have insight into:

Let’s backtrack for a minute…what’s a feedforward neural network?

Encompassed in Artificial Intelligence (AI) is a subsection that consists of neural networks. Neural networks are essentially made up of artificial neurons or nodes that form connected layers.

Typically, a neural network has a similar architecture as the picture above. It starts off with an input layer that takes in certain data from a specific dataset and ends off with an output layer that predicts the final outcome. In between, there are hidden layers that perform complex computations in the network to get from the input to the output layer. If there is more than one hidden layer, then the neural network is “deep”.

My projects consist of deep feedforward neural networks, which means that the network only moves in one direction: forward, from the input layer to the many hidden layers to the output layer. Furthermore, it resets after every epoch, which is one complete run through all of the data forwards and backward when training/testing, making the accuracy higher.

Before I walk you through my code in small increments, let me give you a bit of background information about the datasets to make it easier to understand some complex syntax that is performed with these datasets.

These datasets each contain 60,000 small squares of 28 by 28 pixel images. The Number MNIST dataset contains handwritten 1-digit numbers (0–9) and the model outputs one of these numbers. The Fashion MNIST dataset is similar because it contains 10 classes/choices of outputs, but the data is of clothing items, like a sandal, t-shirt, coat, etc. Despite the data being clothing items, the labels are in the form of numbers 0–9.

Please note: the code of these feedforward neural networks is very similar, except for some tiny changes. I will point out these out in the next couple of sections.

The code I’m explaining is in small chunks. However, if you’d like to see what my whole project looks like and use/refer to it, check out my Github repository for these 2 projects.

Without further ado, let’s dive deep into the code, which is split up into 6 crucial parts:

In this step, we import essential libraries that will be used in further steps:

Step 2: importing the datasets and splitting up the training and testing data

This piece of code defines a variable to transform the images by making them more suitable, which is necessary for later computations.

After defining this variable, you need to get the data from the MNIST datasets in torchvision:

In the code above, we have 2 similar segments: one for the training data and one for the testing (synonymous to evaluation or validation) data, which downloads and loads the necessary data.

Note: the Fashion MNIST dataset follows the same syntax as shown above, but the path to the dataset is "~pytorch/F_MNIST_data/" instead.

To ensure that the data has downloaded and loaded properly, we can run this:

This would end up giving us an arbitrary image (images[0]) in the training dataset that is grey-scaled, since normalize=True.

This part of the code is fairly straightforward if you understand the neural network architecture. When coming up with the model, there are three necessary questions to consider:

This code initializes variables relating to the number of nodes in each layer and then adds different features to it, like the activation and dropout functions.

As the picture above portrays, the model needs the ReLU and Softmax functions, which acts as activation functions in the neural network, and the Dropout function to prevent overfitting (when the model is too aligned with the training data, hence does poorly on the testing data).

Note: the Fashion MNIST model has 3 hidden layers [256, 128, 64] because they’re used to increase the model’s accuracy later on.

To easily conceptualize the training process, think of training the model as trying to shoot a 3-pointer for the first time (you obviously won’t be like Steph Curry and get it in every time 😉). Also, to measure how far off you were from getting it in, you use the shortest distance between the net and the ball → called the loss. You’d probably air ball the first time and realize that the loss was large. Then, you change your technique, strive for a lower loss, and continue this cycle again and again until you get fairly decent accuracy.

This is analogous to what happens when a neural network model is being trained:

In the code above, specifically:

Now that we have trained our model, we need to actually test this model out to understand how the model does with unseen data. The training and testing code blocks are fairly similar, but the testing requires more syntax to print out the results of the epoch it’s currently running through, the losses, and the accuracy of the model when testing.

When testing the model, we need to have two important variables: the total_testing_loss and the amount of times the model classifies the image correctly within the testing dataset (used to determine the accuracy).

After evaluating the model, right under model.train() from the previous code block, the average training loss and testing loss are calculated for that certain epoch. Lastly, the current epoch, training loss, testing loss, and accuracy are printed in a decimal format going up to 3 decimal places.

Note: for the Fashion MNIST model, the accuracy went from 21% to 82%. The accuracy is lower than the Number MNIST model because the images are more complex and would be classified better with CNNs, which is an image classification neural network that I’ll be diving deep into in the coming weeks.

To help comprehend these numbers, we can put them into a simple graph using matplotlib.pyplot as plt.

The above code prints out this double-line graph comparing the training loss and testing loss.

We know our model works due to the low loss and high accuracy we get after training and testing. So, let’s look at an example to visualize what the model outputs:

This code goes through all the images, which to recap, are shuffled after every epoch. It then resizes all the images into a 1D vector.

The Fashion MNIST model has the same code when it come to visualization, but as expected with the different datasets, they have different outputs. 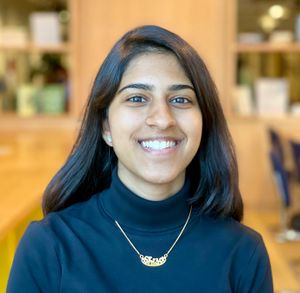 Shiza Charania is an AI enthusiast and an innovator at The Knowledge Society. She is currently building projects in the cross-section of computer vision and healthcare to solve big problems.